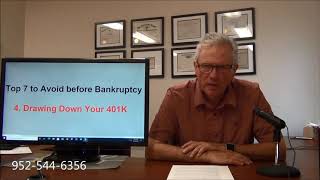 As I’ve been saying, I have a list of what I consider the top seven things you should avoid before filing a bankruptcy, either Chapter 7 or Chapter 13. This is the fourth in a series and is about item four on my list – drawing down your 401K. Items One, Two and Three on my list are discussed in previous blog posts.

In general, money in a 401K is safe from your creditors and safe from the bankruptcy trustee. This is ordinarily also true for IRA accounts as well. Some exceptions have developed recently for accounts that are being transferred as part of a divorce and for accounts that have been inherited – but these are fairly rare problems. Usually a 401K or an IRA is the safest place your money can be. I am very sad when right before coming to see me, somebody cleans out their retirement account.

Most often I see they money used in an attempt to pay down debts. It is almost never enough. Soon the money is gone, and because of finance charges and high interest rates, not much of a dent has been made in the debt load. Other times people withdraw the money because they are afraid creditors will get it – which is sad because with the possible exception of the IRS or the child support people, creditors can’t touch it.

As a general rule, if you are deeply in debt, you should talk with a lawyer before making any serious financial changes.

I am a debt relief agency. I help people file for relief under the federal bankruptcy code. This video does not create an attorney-client relationship and is not legal advice. It is for general information purposes only. The details of your case can make a big difference as to whether or how the contents of this video apply to you.