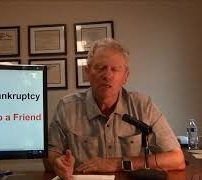 This is the second in my series on things to avoid doing before filing a bankruptcy, either Chapter 7 or Chapter 13.

Outright transfers of assets and large gifts are things to be avoided prior to filing any kind of bankruptcy.  An example might be transferring a car or a motorcycle to one of your children, or giving someone a large amount of money or a very expensive gift for their wedding.  Putting relatively large sums of money in a bank account for a child could be another example.  The bankruptcy trustee in a Chapter 7 case may look at transfers like this as an effort to hide assets.  It can be considered bankruptcy fraud and be very detrimental to the case.  The look back on this under the bankruptcy code is two years, but under Minnesota state law it can go back as far as six years.

529 plans have their own special rules about how much a bankruptcy trustee can claw back. 529 plans are educational savings plans that people set up for their child. They have tax advantages similar to a 401K or IRA. But the bankruptcy trustee in a Chapter 7 can claim anything deposited within a year before the case is filed, and there are limits on how much can be protected for the amounts deposited in the two years before that.

One thing I see people often doing is having their pay check deposited into somebody else’s bank account. Perhaps this is to avoid a creditor who has already cleaned out the debtor’s own bank account. You might or might not have a serious problem with your bankruptcy case if this has been going on, depending on all the circumstances. Best policy is to just to not do it.

I can’t tell you how many times I’ve been told “well I’ll just sell that (boat or motorcycle or whatever) to my brother for a dollar.” That won’t work. Rest assured that this loophole was plugged a very long time ago. That’s not exactly an original idea. When you sell something to someone right before filing a bankruptcy, who you sold it to and for how much has to be disclosed. Your relationship if any with the purchaser also has to be disclosed.

There are various exceptions – loopholes if you prefer – to most of the items I have been talking about here. You need to talk with your lawyer about whether what you did in your circumstances is going to be a problem or not. If you are contemplating bankruptcy, talk with your lawyer before making any significant financial movers. I hate having to say “gosh I wish you had talked with me before doing that.”