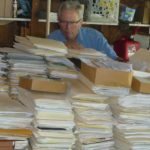 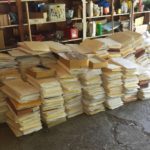 I’m not a paperless kind of guy.  Hard copies of everything in a file folder. That’s how I like to do things.  This of course means that I generate a lot of paper, and every few years I run out of storage space.  After a Chapter 13 or Chapter 7 case is completed, the discharge has been granted and the clerk’s office has closed the case, I move the file to a storage room in the back of my garage.  To me those files represent a lot of work, care, concern, blood and sweat.  Gosh I hate to get rid of them.  But a time comes when one has to let go.  One has to admit that those people really did get a fresh start, they don’t need me any more, and it’s really time to move on and let go – physically let go of the file. 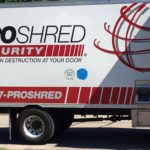 So it was with mixed feelings recently that I called Proshred, a locally owned shredding company near me.  Prior to their arrival on the appointed day, I spent probably at least 20 hours going through all my old files deciding what it was safe to shred and what I had better still keep.  I don’t remember for sure when I did this last, but I noticed right away that for the most part the oldest files I had dated from about 2006.  What I finally wound up with was a big pile of bankruptcy files ranging from about 2006 to about 2012 in the middle of my garage floor. There was no left room to park.

When the truck arrived as one would expect, the driver who was supposed to do all the loading work had just had back surgery.  He showed me the scar.  I was planning on helping him anyway, but it turned out to be more like he was helping me.  The files were moved from my garage to the truck using a full sized 64 gallon garbage can on wheels.  It took about eight trips.  I suppose that means I had about 512 gallons of files.  Never thought of measuring my work by the gallon before.

I could hear the shredding blades doing their work right there at the end of my driveway.  Kind of a strange or odd end to all that concern and pain I thought.  It was comforting to hear from the driver that the remains of the files were going to be recycled and would eventually be used to make new paper at a mill somewhere near Duluth.  As the truck pulled away I felt a bit of sadness, followed by a feeling of lightness and relief.