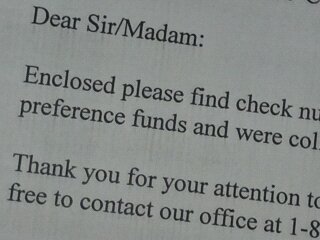 I just love when this happens.  I came in to the office this morning, checked the mail box, and here’s letter from one of the big bill collecting law firms.  Often those 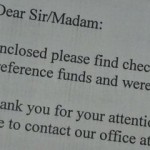 letters can be some kind of bad news, but today the letter contained a check for over $1000 for one of my clients.  This was a refund of the money that they garnished from my client’s pay check in the 90 days before we filed the bankruptcy.

So you might wonder how this can be.  After all, once a bill collector takes your money isn’t is just gone?  Most of the time it really is just gone, forever.  An exception to the rule, however, can be money that was garnished or seized within 90 days before the filing either of a Chapter 7 or a Chapter 13 bankruptcy.  The window for getting the money back is a pretty small one.  It’s necessary to have all the following before any of the money can come back:

So what I tell my clients when we have this situation is that I will set up the bankruptcy petition so that the money is listed as a preference under assets and them claimed as exempt.  When the 30 day exemption period expires, I will write a letter and demand the money.  Then we wait and see if the money turns up.  It only does in about half or less of the  cases.

Many of the creditors are so nasty that they don’t care if the law requires them to give the money back.  They know that nobody can afford to pursue them  if they don’t.  But I am always joyful to see that check come in the cases where they do.

This post is for general information purposes only and does not create an attorney-client relationship.  It is not legal advice.  Please consult the attorney of your choice concerning the details of your case.  I am a debt relief agency helping people to file for relief under the federal bankruptcy code.

Is the economy getting so bad that the bill collectors are going out of business?  From where I sit it appears that at least two of the old tried and true bill collectors have moved out of Minnesota.  When a bankruptcy case is filed, it is very important to be sure that all the creditors are being notified.  The notices are sent out to the creditors by US Mail by a central noticing center which is operated by the court.  When an address is bad or when a notice comes back in the mail in connection with one of my cases, I get notified of that right away by email from the clerk of court’s office. In cases where a collection agency has taken over an account, I always try to list both the original creditor and the agency in the bankruptcy papers.  If the debt has also been referred to a lawyer, I list the law firm on the list of creditors too.

For as long as I can remember, Allied Interstate has been one of the big collection agencies in these parts.  In recent times their office was within a few blocks of mine.  They were located in that big, white office building on the northwest corner of the intersection of I-394 and Highway 169 known as the Interchange Tower.  There was more than one occasion when I was about ready to go over there in person and yell at them.  To me they were an institution, kind of like the federal government.  It never occurred to me that they would not always just be there.  In bad economic times, I would have assumed that their business would have just gotten all the better.

You might imagine how shocked I was to receive a notice, and then another notice, telling me that the address I was using for Allied Interstate was bad.  Well, they had apparently been assigned a number of debts of a couple of my clients – so I had to find a new address for them.  At first I assumed that they had just moved to a new location in their old neighborhood.  As I almost always do when I have such a problem, I went to Google looking for a new address.  There were no results for Minnesota except what I already had.  I went to Bing.  Same result.  Next I tried to call all the phone numbers I could find for Minnesota locations of Allied Interstate.  More shock – they were disconnected.  Finally I stared trying locations outside of Minnesota.  They had been a nation-wide operation.  The first few numbers I tried were not being answered.  Finally someone answered at an Allied Interstate office in Ohio.  He said to use the following address:

So I added that address to the list of creditors at the court web site for both of my cases, and it seems so far to have been a good address.  Meanwhile a notice that I had sent to an Illinois office of Allied Interstate came back in the mail as well.  One has the impression that this outfit is not doing so well.

Not long after this business with Allied Interstate, I received notice that an address I had been using for one of the bill collecting law firms was bad.  They were it seemed to me a lot like Allied Interstate in that they had been around forever.  To me they seemed to be one of the top law firms that over the years had driven many of my clients to my door.  Their office had always been in St. Paul, but they sued people from all over the Twin Cities.  Again I went to Google and several other sources.  What I found or seem to have found is that they closed their St. Paul office and are now doing business from their home office in another state.

From day to day I see little indicators – including the above – that the economy is worse than anybody in the media outlets wants to admit.

This is for general information purposes only, is not legal advice, and does not create an attorney-client relationship.  I am a debt relief agency, helping people file for relief under the federal bankruptcy code.